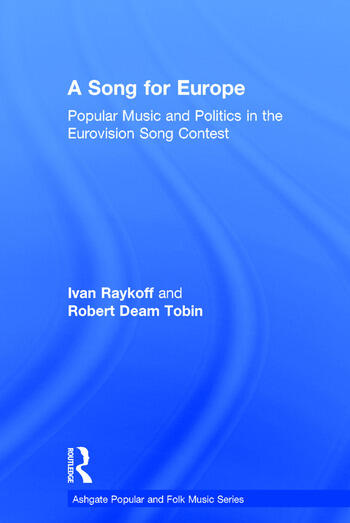 A Song for Europe: Popular Music and Politics in the Eurovision Song Contest

The world's largest and longest-running song competition, the Eurovision Song Contest is a significant and extremely popular media event throughout the continent and abroad. The Contest is broadcast live in over 30 countries with over 100 million viewers annually. Established in 1956 as a televised spectacle to unify postwar Western Europe through music, the Contest features singers who represent a participating nation with a new popular song. Viewers vote by phone for their favourite performance, though they cannot vote for their own country's entry. This process alone reveals much about national identities and identifications, as voting patterns expose deep-seated alliances and animosities among participating countries. Here, an international group of scholars from a variety of disciplines, including musicology, communications, history, sociology, English and German studies, explore how the contest sheds light on issues of European politics, national and European identity, race, gender and sexuality, and the aesthetics of camp. For some countries, participation in Eurovision has been simultaneously an assertion of modernity and a claim to membership in Europe and the West. Eurovision is sometimes regarded as a low-brow camp spectacle of little aesthetic or intellectual value. The essays in this collection often contradict this assumption, demonstrating that the contest has actually been a significant force and forecaster for social, cultural and political transformations in postwar Europe.

'This carefully ordered, interdisciplinary series of essays on the Eurovision Song Contest yields some strong, perhaps counter-intuitive arguments. Ethnicity, of course, in its many manifestations, proves a key issue, but so do relationships between centre and periphery, here frequently characterised in terms of campness - an indication that the entire collection is theoretically rich. The essays, whether detailed studies of individual songs, of the changing strategies of individual countries, or of the larger context, explore how Eurovision is so much more than just a song contest - it is a stage on which various political games are played out and, contrary to the way the show is packaged "on the night", observing the strategies pursued by some countries over the years really does raise questions about whether Eurovision is about winning. This is a refreshing collection, another valuable demonstration of the deep cultural understanding available through consideration of the supposedly banal, which is one reason why so many of us became academically interested in pop music in the first place.' Allan Moore, University of Surrey,UK 'This volume offers a compelling range of interdisciplinary perspectives written by a first-rate group of international scholars. The range of both authors and perspectives is only fitting for the first academic study of the televisual-musical spectacle that anticipated the widespread contemporary 'Idol' phenomenon. In addition to discussing the Eurovision Song Contest, A Song for Europe provides a fine introduction to readers interested in understanding the multi-media context that is increasingly the primary site for the reception of music. This volume also serves the valuable purpose of raising awareness of the contest among readers outside of Europe.' David Brackett, McGill University, Canada 'Raykoff and Tobin's collection of essays is [...] a fresh and thought-provoking read, as the contributions are theoretically informed, wel

A Song for Europe: Popular Music and Politics in the Eurovision Song Contest