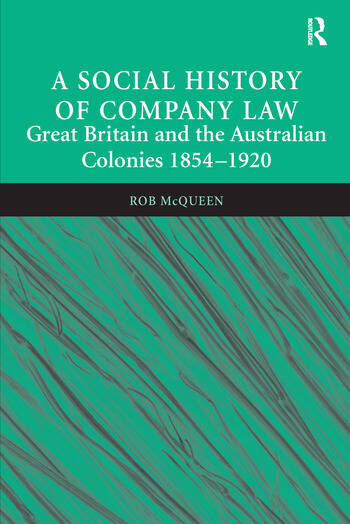 A Social History of Company Law: Great Britain and the Australian Colonies 1854–1920

The history of incorporations legislation and its administration is intimately tied to changes in social beliefs in respect to the role and purpose of the corporation. By studying the evolution of the corporate form in Britain and a number of its colonial possessions, the book illuminates debates on key concepts including the meanings of laissez faire, freedom of commerce, the notion of corporate responsibility and the role of the state in the regulation of business. In doing so, A Social History of Company Law advances our understanding of the shape, effectiveness and deficiencies of modern regulatory regimes, and will be of much interest to a wide circle of scholars.

'McQueen's timely book fills a gap in the literature by covering a period that was not studied comprehensively in recent decades. Its social history approach, particularly apt in the current period of corporate governance crisis, places company law in a thicker context. The book extends beyond Britain into its Empire and thus should interest a wider circle of scholars.' Ron Harris, Tel Aviv University, Israel 'This is a carefully argued and richly detailed piece of corporate law and legal history scholarship which should become a standard reference. It underlines the vital importance of understanding history for anyone who wishes to be truly engaged in current debates about the regulation, governance and social responsibility of corporations. ' Stephen Bottomley, ANU College of Law, Australia 'Rob McQueen reveals the modern corporate form as an embodiment of narrow interests and values; a product of political and ideological choices. Brilliant, thoroughly researched and elegantly written, A Social History of Company Law not only demonstrates the origins of the corporation, but also inspires the question - how might it be remade into something different?' Joel Bakan, University of British Columbia, Canada 'This path-breaking study provides a fascinating comparative social history of company law in Britain and the Australian Colonies, their relationship to colonialism, empire building and imperialism, and their larger socio-economic significance. McQueen effectively mines the archives and secondary literature to advance our understanding of the institutional legacies of the past and to offer a nuanced account of how the history of company law in Britain and the Australian Colonies laid the foundation for similar but divergent patterns of contemporary corporate governance. The book is clear and accessible, and will be of interest to students and scholars in Law and History, and to those concerned with the interplay between law and society.' David Sugarman, Unive

A Social History of Company Law: Great Britain and the Australian Colonies 1854–1920