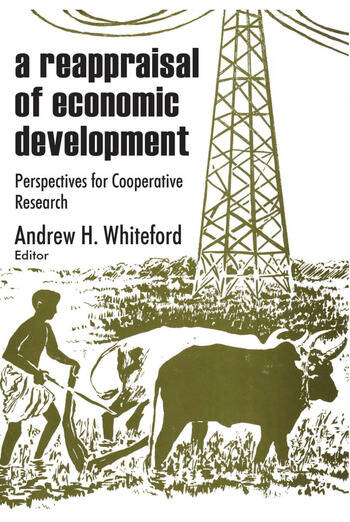 A Reappraisal of Economic Development: Perspectives for Cooperative Research

What have the social sciences to show for decades of systematic investigation of the problems of economic development? What basic problems have they solved and what remains to be done in the development of viable theoretical approaches to this area of research and policy? In an unusually open discussion, thirty-three experts from the fields of anthropology, economics, political science, geography, sociology, and agriculture here present a stimulating re-examination of their accomplishments and mutual problems, of the progress the disciplines have made, and that which remains.

The increased interest of social scientists in their sister disciplines has not been stimulated solely by intellectual exploration into the problems that they share and the particular insights each provides. Much of the interest stems from the groping and searching concern of field workers who find themselves investigating problems and systems which cannot be understood adequately in terms of a single kind of analysis, be it political, social, cultural, historical, or psychological. Fieldwork thrusts upon them the realization that their professional areas of concern overlap and converge upon aspects of life which traditionally (or academically) lie in the domains of other disciplines.

A Reappraisal of Economic Development is distinguished by the vitality and spark of scholars of different disciplines interacting with each other. The book's formal essays are deliberately short, leaving the bulk of the volume to intensive, cross-disciplinary investigation of the positions, accomplishments, and proposals of the speakers and their critics. The result is a fruitful re-evaluation of the political, social, and geographic forces affecting economic development in emerging nations and a useful handbook for anyone dealing with the varied problems of foreign aid, health and educational development, labor organization, and foreign business.

A Reappraisal of Economic Development: Perspectives for Cooperative Research