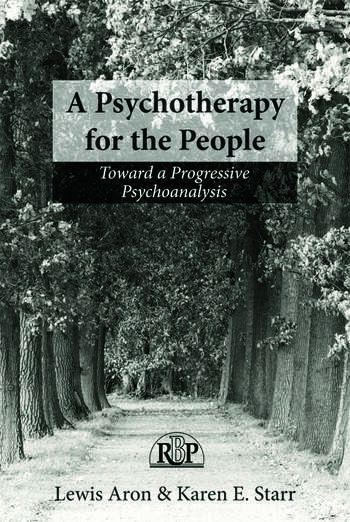 A Psychotherapy for the People: Toward a Progressive Psychoanalysis

Inspired by the progressive and humanistic origins of psychoanalysis, Lewis Aron and Karen Starr pursue Freud's call for psychoanalysis to be a "psychotherapy for the people." They present a cultural history focusing on how psychoanalysis has always defined itself in relation to an "other." At first, that other was hypnosis and suggestion; later it was psychotherapy. The authors trace a series of binary oppositions, each defined hierarchically, which have plagued the history of psychoanalysis. Tracing reverberations of racism, anti-Semitism, misogyny, and homophobia, they show that psychoanalysis, associated with phallic masculinity, penetration, heterosexuality, autonomy, and culture, was defined in opposition to suggestion and psychotherapy, which were seen as promoting dependence, feminine passivity, and relationality. Aron and Starr deconstruct these dichotomies, leading the way for a return to Freud's progressive vision, in which psychoanalysis, defined broadly and flexibly, is revitalized for a new era.

A Psychotherapy for the People

will be of interest to psychotherapists, psychoanalysts, clinical psychologists, psychiatrists--and their patients--and to those studying feminism, cultural studies and Judaism.

Karen Starr is the author of Repair of the Soul: Metaphors of Transformation in Judaism and Psychoanalysis (Routledge, 2008). She is a candidate at the New York University Postdoctoral Program in Psychotherapy and Psychoanalysis, and a recipient of the Ruth Stein Prize. She is in private practice in New York City.

A Psychotherapy for the People: Toward a Progressive Psychoanalysis