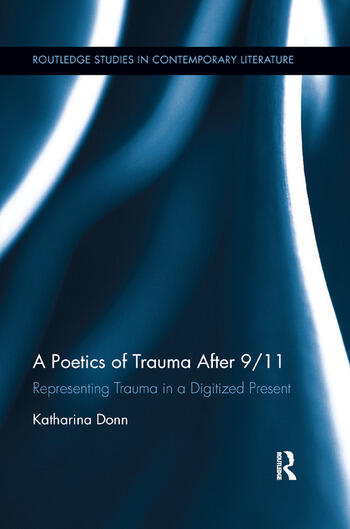 A Poetics of Trauma after 9/11: Representing Trauma in a Digitized Present

The 9/11 attacks brought large-scale violence into the 21st century with force and have come to epitomize the entanglement of intimate vulnerability and virtual spectacle that is typical of the globalized present. This book works at the intersection of trauma studies, affect theory, and literary studies to offer radically new interpretive frames for interrogating the challenges inherent in representing the initial moments of the terrorist encounter. Beyond the paradigm of traumatic unspeakability, post-9/11 texts expose the materiality of the human body in its universal vulnerability. The intersubjective empathy this engenders is politically subversive, as it undermines the discourse of historical singularity and exceptionalism by establishing a global network of reference and dialogue. Innovative theoretical interconnections between clinical pathology, concepts of cultural trauma, and political aesthetics lay the foundations for exploring formally and geographically diverse texts. Close readings of works by Jonathan Safran Foer, Art Spiegelman, Don DeLillo, and William Gibson map the relationship between representations of 9/11 and complex aspects of trauma theory. This detailed approach makes a case for revisiting trauma theory and bringing its Freudian origins into the digitized present. It showcases trauma as a physical and psychological wound as well as an experience that is simultaneously pre-discursive and inhibited by the virtuality of the present-day real. Exploring how contemporary trauma studies can take into account the digitization and virtuality of present-day realities, this book is a key intervention in establishing a contemporary ethics of witnessing terror.

Introduction: From Memory to Mediation. Towards a Trauma Theory of the Digitized Present

(Im) Possibilities of Representation: Virtual Trauma and the Real

The Ethics of Form: Trauma Literature After 9/11

From the Frame to Critique: Discursive Power in a Context of Cultural Trauma

Vulnerability as Spectacle? Figuring the Fall

Encountering the Face of the Other: Alterity after Trauma

Records to be made? Silence and Testimony

Historical and Symbolic Archives: Meandering towards the Present Absence of 9/11

"Icons of a More Innocent Age"? Art Spiegelman’s In the Shadow of No Towers

"I never Loved those Arrogant Boxes": Enacting Trauma in Comix

Metamorphosing Trauma: 9/11 as the Grotesque

Against the End of Irony: Trauma as Resistance

The Ethics of Witnessing Terror: Falling into Perception

Realities of Trauma, the Trauma of Reality: Witnessing as Pattern Recognition

The ‘Footage:’ Video Art and the Negative Sublime

Affect and Globalization: Histories of Violence and Post-Traumatic Encounters

Conclusion: Re-Situating the Subject in the Af

Katharina Donn is a lecturer and postdoctoral fellow at the University of Augsburg, Germany, focusing on trauma and memory in U.S.-American literature, and has held visiting fellowships at the Eccles Centre for American Studies, the Institute of Advanced Studies at University College London, and a visiting professorship at the University of Texas at Austin.

A Poetics of Trauma after 9/11: Representing Trauma in a Digitized Present