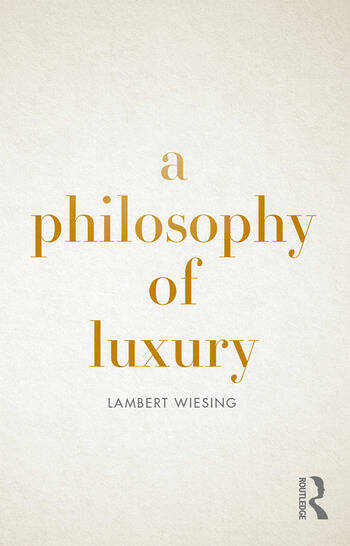 A Philosophy of Luxury

In this thought-provoking book Lambert Wiesing asks simply: What is luxury? Drawing on a fascinating range of examples, he argues that luxury is an aesthetic experience. Unlike experience gained via the senses, such as seeing, hearing or tasting, he argues that luxury is achieved by possessing something – an aspect of philosophy that has been largely neglected. As such, luxury becomes a gesture of individual defiance and a refusal to conform to social expectations of restraint. An increasingly rational and goal-oriented ethos in society makes the appeal of luxury grow even stronger.

Drawing on the ideas of philosophers such as Immanuel Kant, Friedrich Schiller, Martin Heidegger and the novelist Ernst Jünger, as well as sociologists such as Thorstein Veblen and Theodor Adorno, A Philosophy of Luxury will be of great interest to those in philosophy, art, cultural studies and literature as well as sociology.

Foreword to the English edition

1. Anthropology and the Idea of self-experience

2. Aesthetics and the search for moments of self-experience

Part 2: Luxury: The Dadaism of Possession

3. The Judgment of Luxury

"Luxury has a bad reputation, built on marble and gold, boutique shopping and penthouse suites. This award-winning book, finally available in English, forces us to rethink all of that. Wiesing separates luxury from vulgar displays of wealth and power. Instead, he shows that it is an important aesthetic experience, available to all of us. Erudite, accessible, and beautifully translated, Luxury promises to become a classic of philosophical aesthetics." - John V. Kulvicki, Dartmouth College, USA

A Philosophy of Luxury