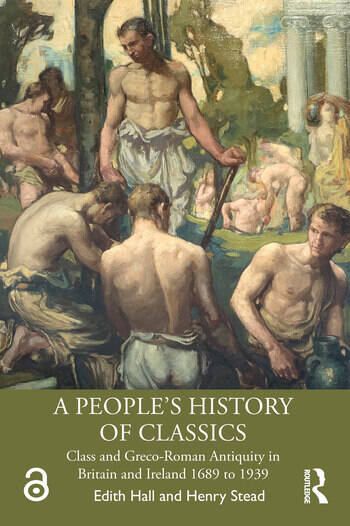 A People's History of Classics: Class and Greco-Roman Antiquity in Britain and Ireland 1689 to 1939

A People’s History of Classics explores the influence of the classical past on the lives of working-class people, whose voices have been almost completely excluded from previous histories of classical scholarship and pedagogy, in Britain and Ireland from the late 17th  to the early 20th century.

This volume challenges the prevailing scholarly and public assumption that the intimate link between the exclusive intellectual culture of British elites and the study of the ancient Greeks and Romans and their languages meant that working-class culture was a ‘Classics-Free Zone’. Making use of diverse sources of information, both published and unpublished, in archives, museums and libraries across the United Kingdom and Ireland, Hall and Stead examine the working-class experience of classical culture from the Bill of Rights in 1689 to the outbreak of World War II. They analyse a huge volume of data, from individuals, groups, regions and activities, in a huge range of sources including memoirs, autobiographies, Trade Union collections, poetry, factory archives, artefacts and documents in regional museums. This allows a deeper understanding not only of the many examples of interaction with the Classics, but also what these cultural interactions signified to the working poor: from the promise of social advancement, to propaganda exploited by the elites, to covert and overt class war.

A People’s History of Classics offers a fascinating and insightful exploration of the many and varied engagements with Greece and Rome among the working classes in Britain and Ireland, and is a must-read not only for classicists, but also for students of British and Irish social, intellectual and political history in this period. Further, it brings new historical depth and perspectives to public debates around the future of classical education, and should be read by anyone with an interest in educational policy in Britain today.

2. The Invention of Classics

5. Classics and Class in Life-Writing

6. Working-Class Classics via the Visual Environment

18. Class and the Classical Body

19. Gods and Heroes of the Proletariat

24. Soldiers: Dai and Diomedes on the Somme

Edith Hall is Professor of Classics at King’s College London, UK and is leader of a campaign to introduce Classical Civilisation and Ancient History qualifications across the UK state-school sector. She has published 30 books on ancient Greek and Roman civilisation and its continuing influence, and in 2015 was awarded the Erasmus Medal of the European Academy.

is Lecturer in Latin at the University of St Andrews, UK. His research project ‘Brave New Classics’ explores the relationship between the Greek and Roman classics and world communism. He is the author of A Cockney Catullus (2015), a translator of Latin poems and co-editor of Greek and Roman Classics in the British Struggle for Social Reform (2015).

A People's History of Classics: Class and Greco-Roman Antiquity in Britain and Ireland 1689 to 1939