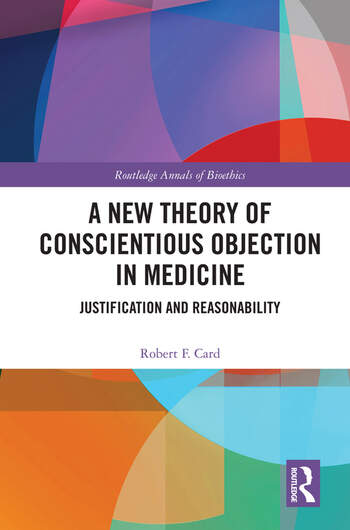 This book argues that a conscientiously objecting medical professional should receive an exemption only if the grounds of an objector’s refusal are reasonable. It defends a detailed, contextual account of public reasonability suited for healthcare, which builds from the overarching concept of Rawlsian public reason.

The author analyzes the main competing positions and maintains that these other views fail precisely due to their systematic inattention to the grounding reasons behind a conscientious objection; he argues that any such view is plausible to the extent that it mimics the ‘reason-giving requirement’ for conscience objections defended in this work. Only reasonable objections can defeat the prior professional obligation to assign primacy to patient well-being, therefore one who refuses a patient’s request for a legally available, medically indicated, and safe service must be able to explain the grounds of their objection in terms understandable to other citizens within the public institutional structure of medicine. The book further offers a novel policy proposal to deploy the Reasonability View: establishing conscientious objector status in medicine. It concludes that the Reasonability View is a viable and attractive position in this debate.

will be of interest to researchers and advanced students working in bioethics, medical ethics, and philosophy of medicine, as well as thinkers interested in the intersections between law, medical humanities, and philosophy.

Chapter 2: The Inescapability of Reasons-Assessment

Robert F. Card is Professor of Philosophy at the State University of New York Oswego. He has been Fellow in Clinical Ethics and Visiting Associate Professor of Medicine at the University of Rochester Medical Center (URMC), as well as Scholar in Residence in the Division of Medical Humanities and Bioethics at URMC.