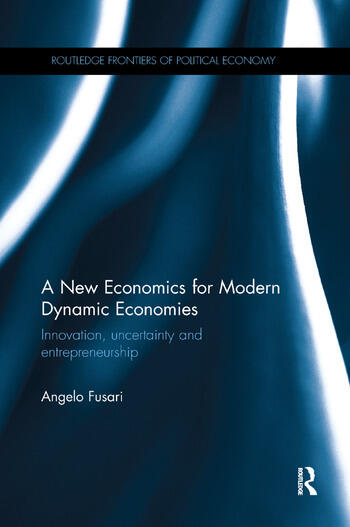 It is becoming increasingly clear that a new economics is required for investigating modern dynamic economies and the coming social world. Important features of those economies, such as innovation, uncertainty and entrepreneurship, are usually considered capitalist features. This may have been true historically, but this book argues that the contrary will be true for the future: the full and efficient operation of those supposed capitalist features will increasingly require the overcoming of capitalist civilization.

In this book, Angelo Fusari constructs a theoretical framework for the interpretation and management of modern dynamic economies which demonstrates that institutional transformations are essential if we are to move beyond the current consumer-capitalist age and the age of the domination of financial capital. A New Economics for Modern Dynamic Economies opens with a consideration of the basic aspects of modern dynamic economies and proceeds to develop a representation of the whole economic system centred on the interrelationships between entrepreneurship, innovation and radical uncertainty in a ‘dynamic competition’ process. This model provides an explanation of business cycles that largely differs from current explanations as it derives from the notion of dynamic competition. The book is then extended from the sectoral to the micro level and then to the level of the firm. The second half of the book is concerned with operational problems and in particular with the integration of this analysis of cycles with the notion of historical phases of development. The final chapter explores the route of the transition from capitalism to a new economic and social order – a transition of vital importance, both for the contemporary world and for the coming world.

This volume is of great interest to those who study political economy, macroeconomics and economic theory and philosophy. The book shows the possibility of a scientific explanation of important ethical principles as indispensable to the organizational efficiency of the social system: for instance, the necessity and the way to conciliate productive efficiency, social justice and individual freedom.

1. Innovation, uncertainty, entrepreneurship: modeling the dynamic process of the economy

3. An explanation of economic change and development

4. A micro representation of the innovation-adaptation mechanism driving economic dynamics

5. An analysis on the theory of the firm: organizational forms and dimensions

6. Radical uncertainty, dynamic competition and a model of the business cycle: the implications of a measure and an explanation of what is supposed immeasurable and unexplainable

PART II: Problems of political economy: the need for reformations

7. An overview of the economic process

8. The role of demand in contemporary economics: theoretical and operational ambiguities and misunderstandings

12. Toward a noncapitalist market system: spontaneous order and organization

Angelo Fusari was Director of Research at ISAE (Institute for Studies and Economic Analyses), where he dedicated attention to the performance of Business Tendency Surveys harmonized at the European level, was in charge of ISAE for Italy and investigated innovation, uncertainty and entrepreneurship with the connected forms of dynamic competition and business cycles.