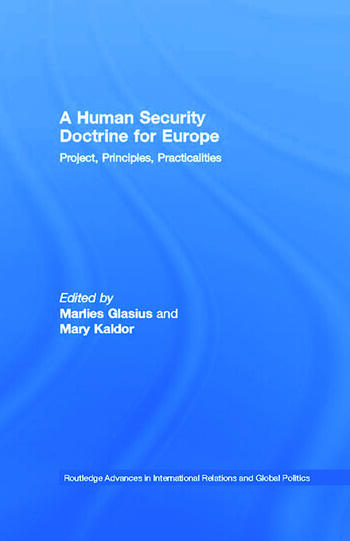 A Human Security Doctrine for Europe explores the actual needs of individual people in conflict areas, rather than using a conventional institutional or geo-political perspectives.

This new volume proposes that Europe should develop a new kind of human security capability that involves the military, the police and civilians all working together to enforce law rather than to fight wars. It argues that threats such as weapons of mass destruction or terrorism can only be countered if we address the insecurity of people in all parts of the world.

Many people in the world lead intolerably insecure lives. In large parts of Africa, the Balkans, Central Asia and the Middle East, men and women live in daily fear of violent attacks, kidnapping, rape, extortion, robbery or trafficking. The existence of large military apparatuses does not create security; indeed, as in Iraq, the use of regular military forces may only make things worse. This stimulating study includes:

Written by a diverse team of international experts, this book will of be of strong interest to students and researchers of security studies, peace studies, human rights and international relations.

A Human Security Vision for Europe and Beyond

The Challenges to Re-Establishing A Public Monopoly of Violence

Old and New Insecurity in the Balkans: Lessons from the EU’s

Sierra Leone’s War in a Regional Context: Lessons from Interventions

Human Security in the South Caucasus

Middle East Security: A View from Israel, Palestine and Iraq

Part III: A Framework for Operations

Women as Agents of Change in Conflict and Post-Conflict Situations

Culture and Capabilities of the New EU Members

Principles for the Use of the Military in Support of Law-Enforcement Operations: Implementing the European Security Strategy

What Colour Is Your Elephant? The Military Aspect of European Security

A Human Security Doctrine for Europe

Marlies Glasius is a Research Fellow at the Centre for the Study of Global Governance, London School of Economics and Political Science.

Mary Kaldor is Director of the same centre and Professor of Global Governance. She is the author of New and Old Wars (1999), The Imaginary War (1990) and numerous other studies on global security. The editors are the coordinator and the convenor of the Study Group on Europe’s Security Capabilities.