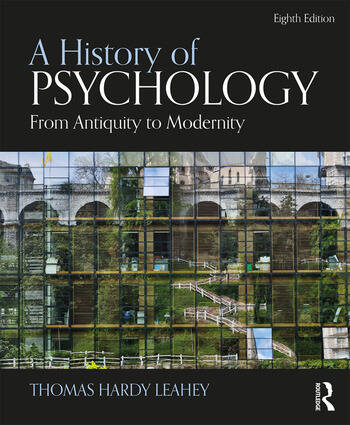 A History of Psychology: From Antiquity to Modernity

A History of Psychology places social, economic, and political forces of change alongside psychology’s internal theoretical and empirical arguments, illuminating how the external world has shaped psychology’s development, and, in turn, how the late twentieth century’s psychology has shaped society. Featuring extended treatment of important movements such as the Enlightenment and the Scientific Revolution, the textbook approaches the material from an integrative rather than wholly linear perspective. The text carefully examines how issues in psychology reflect and affect concepts that lie outside the field of psychology’s technical concerns as a science and profession.

This new edition features expanded attention on psychoanalysis after its founding as well as new developments in cognitive science, artificial intelligence, and behavioral economics. Throughout, the book strengthens its exploration of psychological ideas and the cultures in which they developed and reinforces the connections between psychology, modernism, and postmodernism. The textbook covers scientific, applied, and professional psychology, and is appropriate for higher-level undergraduate and graduate students.

The Psychology of Consciousness

The Psychology of the Unconscious

The Psychology of Adaptation

Psychological Science in the Modern World

A History of Psychology: From Antiquity to Modernity