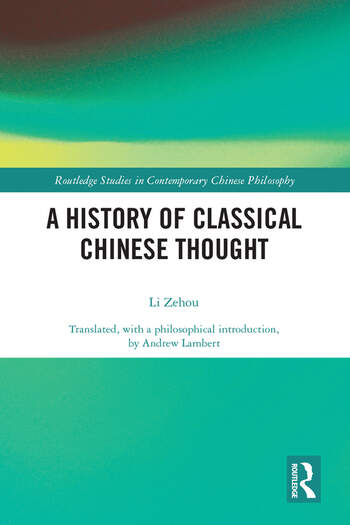 A History of Classical Chinese Thought

Li Zehou is widely regarded as one of China’s most influential contemporary thinkers. He has produced influential theories of the development of Chinese thought and the place of aesthetics in Chinese ethics and value theory. This book is the first English-language translation of Li Zehou’s work on classical Chinese thought. It includes chapters on the classical Chinese thinkers, including Confucius, Mozi, Laozi, Sunzi, Xunzi and Zhuangzi, and also on later eras and thinkers such as Dong Zhongshu in the Han Dynasty and the Song-Ming Neo-Confucians.

The essays in this book not only discuss these historical figures and their ideas, but also consider their historical significance, and how key themes from these early schools reappeared in and shaped later periods and thinkers. Taken together, they highlight the breadth of Li Zehou’s scholarship and his syncretic approach—his explanations of prominent thinkers and key periods in Chinese intellectual history blend ideas from both the Chinese and Western canons, while also drawing on contemporary thinkers in both traditions. The book also includes an introduction written by the translator that helpfully explains the significance of Li Zehou’s work and its prospects for fostering cross-cultural dialogue with Western philosophy.

A History of Chinese Classical Thought will be of interest to advanced students and scholars interested in Chinese philosophy, comparative philosophy, and Chinese intellectual and social history.

Chapter 2. A Preliminary Exploration of the Mohists

Chapter 4. Key Features of the Xunzi, Yizhuan and the Doctrine of the Mean

Chapter 7. Some Thoughts on Neo-Confucianism

Chapter 9. Some Thoughts on Chinese Wisdom

Li Zehou is widely regarded as China’s leading scholar of traditional and modern intellectual history and philosophy. In philosophy, his specialization is aesthetics and ethics, but he has also written on Kant, ancient thought, and modern political thought. He is the author of The Path of Beauty: A Study of Chinese Aesthetics (1995), and Four Essays on Aesthetics: Toward a Global View (with Jane Cauvel, 2006), and The Chinese Aesthetic Tradition (2010).

Andrew Lambert is an Assistant Professor of Philosophy Department at College of Staten Island, City University of New York. His research focuses on ethics and Chinese thought, and he has published various translations and articles concerning Chinese and Comparative Philosophy.

A History of Classical Chinese Thought