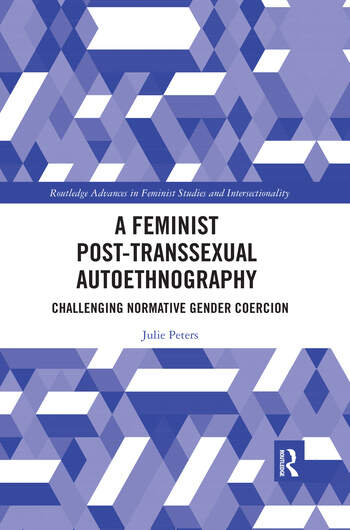 Gender as a social class along with its concomitant heteronormative gender coercion seem to be intransigent across time and cultures. But across these cultures we also see a degree of nonconforming behaviour which very often carries significant multi-dimensions of stigma and risk; because the exception proves the rule, an understanding of gender nonconformity sheds light on the normative operation of gender in society.

attempts to demythologise trans and gender diversity by conducting an in-depth critical analysis of the life choices of the autoethnographic subject (the author), who was so uncomfortable with their culturally allocated masculinity that they chose to live an apparently normal female life. The research is post-transsexual in that the subject forgoes passing in their affirmed gender to ensure the integrity of the data.

may primarily appeal to students and researchers interested in the Sociology of Gender and Sociology of Trans and Gender Diversity, as well as the broader areas of embodiment and power differentials based on gender, class, nationality, location, temporality, sexuality and gender (non)conformity. This insightful volume may also be of interest to those within the fields Health Promotion and Education, Human Rights, Social Justice and Equity or the Social and Cultural Anthropology of Gender.

1 The Gendered Subject in the Social World

1.1 Research Themes and Structure of the Work

1.4 The Exegesis — Analysis and Interpretation

2.2 The Subject in the Social World

2.4 Trans and Gender-Diverse Health and Wellbeing

5.2 The Art of Becoming Myself in a Gendered World

6 My Accommodation to the Social World

6.1 The Interplay between Desire and Normative Gender Coercion

6.2 Agency Grounded in a Transformation of Subjectivity

7 The Subject’s Explication of the Social World

7.1 Society Needs Coercion for Gender to be Performed ‘Naturally’

7.4 A Critique of Complexes of Power on Gender Nonconformity

8.1 Strategies for Achieving the Necessities in Life

8.2 Strategies for a Healthy Life

8.2 Strategies for Achieving a Life with Agency

8.4 Strategies for Making One’s Life a Work of Art

8.5 The Realistic Possibility of Social Change

9.1 A Non-Pathological Schema on the Operation of Gender

is a freelance researcher, consultant and sessional teaching academic, based in Melbourne, Australia. Her research is a culmination of her decades of activist and academic work promoting understanding of and social justice and equity for trans and gender diverse individuals.