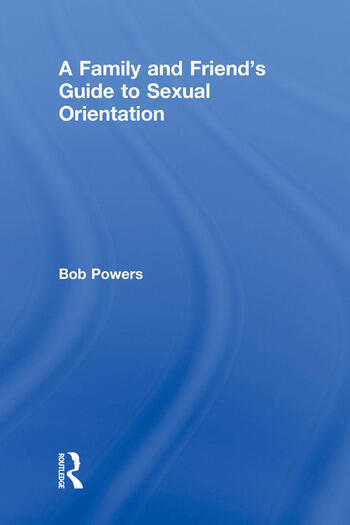 A Family and Friend's Guide to Sexual Orientation: Bridging the Divide Between Gay and Straight

A Family and Friend's Guide to Sexual Orientation helps individuals and families to bridge the divide between gay and straight, to heal wounds that often accompany individuals and families' negative feelings about lesbians, gay men, bisexuals, and transgendered persons. Consisting of thirty stories by individuals who have come to accept and embrace their own sexuality, twelve of the stories are by heterosexuals who, in addition to talking about their own sexuality, speak of the homosexuality of a loved one. The book also includes five personal stories from two families.

Bob Powers is president of Bob Powers & Associates, Inc. Alan Ellis teaches psychology and human sexuality at San Francisco State University. They are the authors of A Managers Guide to Sexual Orientation in the Workplace also published by Routledge.

"Power and Ellis' book is a great next step for families and friends in various stages of coming to terms with a lvoed one being out. A Family and Freind's Guide to Sexual Orientation is rich in emotional depth...The book seems to ofer something for everyone, whether dealing with these issues in personal or professional life, from a spiritual place or some other perspective." -- Philadelphia Gay News
"...while there are a lot of books on the market that address the issues inherent in coming out to friends and family, this is the first one I've come across which actively embraces the role of these other people who mean so much to us. In A Family and Friend's Guide to Sexual Orientation, Powers and Ellis have created a wonderful volume of personal essays and accessible information that will help anyone who truly wants to understand and embrace the (perhaps) new-found gay person in his or her life... In the era of the "Don't Ask Don't Tell" attitude that extends far beyond the military, Powers and Ellis' book affirms, and indeed encourages, a "Do Ask, Do Tell" policy that will help build bridges between individuals." -- Bay Windows
"The moving stories in this book can help all of us in our own healing and in helping to heal the separation that often exists around this issue." -- Gerald G. Jampolski, M.D., author of Love is Letting Go of Fear
"Because so many family members do not know how to deal with the sexual orientation of their loved ones, they simply refuse to talk about it. As a result, they are thrown into a (heterosexual) closet of their own making. In reading A Family and Friend's Guide to Sexual Orientation, I was struck by the possibility that this book can open their eyes in a way similar to how the Big Book of Alcoholics Anonymous opens the eyes of problem drinkers." -- David Berenson, M.D., Psychiatrist and Director, Family Institute of San Francisco

A Family and Friend's Guide to Sexual Orientation: Bridging the Divide Between Gay and Straight