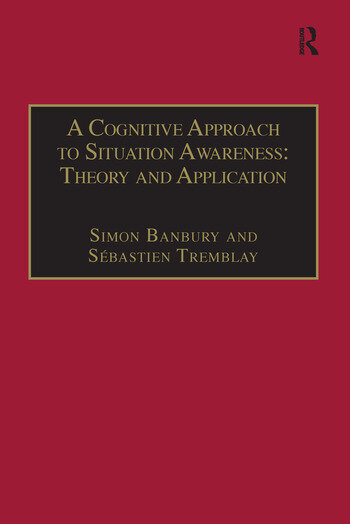 A Cognitive Approach to Situation Awareness: Theory and Application

The importance of 'situation awareness' (SA) in assessing and predicting operator competence in complex environments has become increasingly apparent in recent years. It has been widely established that SA is a contributing factor to many commercial and military accidents and incidents. Yet determining exactly what constitutes SA is a very difficult task, given the complexity of the construct itself, and the many different processes involved with its acquisition and maintenance. This volume brings together recent developments from researchers and practitioners from around the world who are studying and applying SA from a cognitive perspective. The 41 contributors represent many different theoretical perspectives, research approaches and domains of application. Each chapter has a primary emphasis around one of three main topics - theory, measurement and application and examines the considerable inter-linkage between them. To bring further coherence to the book, all of the contributors received draft manuscripts of those chapters most relevant to their own. Designed to be completely international and interdisciplinary, the authors themselves present varied perspectives from academic departments and industrial organisations from around the world, and from broad applications - with contributions from researchers in the domains of process control, sport, aviation, transportation, and command and control. The readership includes practitioners, academics and researchers within human factors, ergonomics and industrial psychology; Graduate and Undergraduate students specialising within these areas during their final year.

Simon Banbury is currently a Lecturer at the School of Psychology, Cardiff University and a Senior Human Factors Consultant at the Centre for Human Sciences, QinetiQ, U.K. From 1996 to 2000, he was a Senior Psychologist at the Defence and Evaluation and Research Agency (DERA), U.K. He received his Ph.D. in Psychology from the University of Reading in 1996. Sébastien Tremblay is currently an Assistant Professor at the School of Psychology, Université Laval, Canada. His main research interests relate to human cognition and performance. Prior to his appointment at Laval, Dr Tremblay held a postdoctoral fellowship at Cardiff University, funded by DERA, U.K. He holds a Ph.D. in Psychology (1999, Cardiff University, U.K.)

'... does a remarkably effective job in integrating a scholarly scientific approach to situation awareness, with a more design-oriented engineering approach...certainly the most comprehensive volume on the topic of situation awareness, a concept that has emerged over the past 20 years as vitally important in understanding human-system interactions in complex systems. The diversity of approaches to and applications of the topic contained within the 16 chapters is wonderfully appealing.' Professor Chris Wickens, University of Illinois at Urbana- Champaign, USA 'A timely addition to the scientific literature on situation awareness; Banbury and Tremblay have achieved an admirable blend of cognitive psychology with practical applications, from aviation and beyond. This volume will be stimulating reading for anyone interested in improving their understanding of the underlying processes for this important cognitive skill.' Rhona Flin, Professor of Applied Psychology, University of Aberdeen, UK. ’Simon Banbury and Sebastian Tramblay have assembled a very useful book, specifically for those readers involved in the domain of researching Situational Awareness.’ Aerlines Magazine, Issue 31 'This is an excellent book for all who have an interest in knowing more about where researchers are in the theory and application of SA. Its strong point is that the contributing authors read one-another's drafts and make references to them. This helps to unify the chapters. The book lives up to its promise to show what progress has been made since 1995. Although one still hears disagreement about the definition and nature of SA and how best to measure it, there is a growing consensus about the value of the concept. This book includes some novel perspectives (eg implicit SA measures and how cognitive streaming relates to SA) that provide new ways to understand and measure SA that are certain to help those in the HF/E community to build improved SA models and apply them to the desig

A Cognitive Approach to Situation Awareness: Theory and Application